Assuming that a dumbbell has been lifted to the shoulder, there are several ways of getting it to full  arms’ length above the head with one hand.

The simplest way – and incidentally the way that requires the most strength – is the “MILITARY PRESS.” A dumbbell (short handle) is generally used. The lifter is allowed to raise it as he pleases to the shoulder, but when the bell has reached the shoulder he must stand absolutely erect, heels together, knees together, legs straight, left hand clapped against the left thigh. He must hold the bell slightly away from the shoulder, and the inside of the right upper arm must NOT touch the RIGHT SIDE. Pausing in this position for a second or so, the lifter must then slowly and steadily push the bell aloft, but, meanwhile, the body must reman in the same erect military position as at the start. It is permissible to turn the head and watch the bell as it goes upwards –  and just before the arm is straight, the body may bend sideways at the waist for a fraction of an inch. 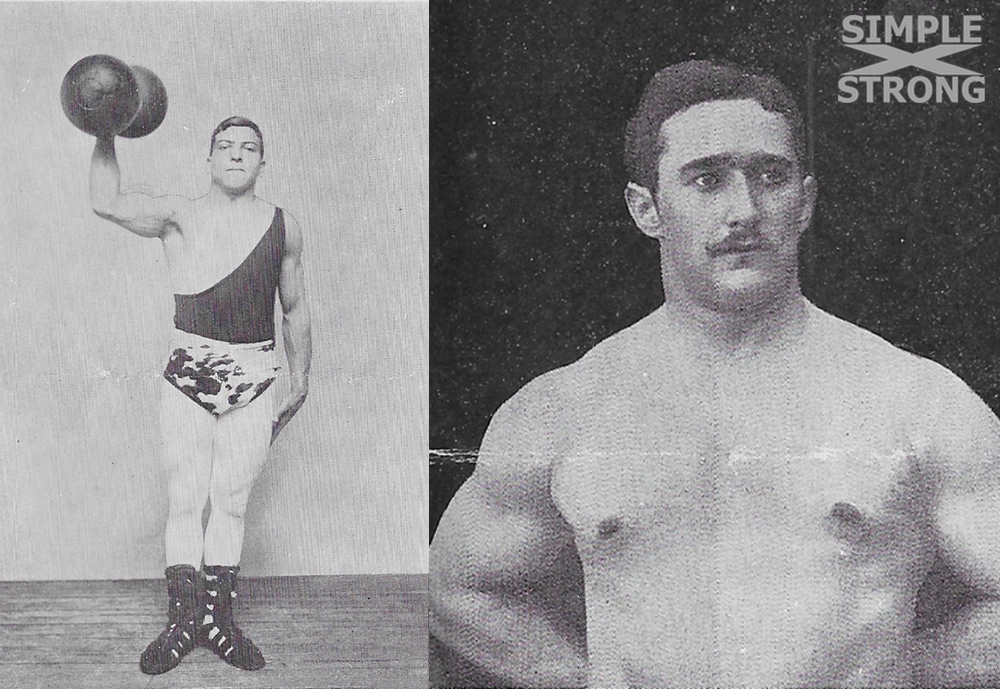 Any bending of the legs, or any sideways swing of the body preparatory to the press, disqualifies; so does bending backwards while pressing.

This lift has been regarded as a test of arm and shoulder strength, but a man must also have marvelously strong side muscles to prevent his body from bending at the waist.

The great Arthur Saxon, who holds the World’s Professional record in the one-arm BENT PRESS (336 pounds ), modestly states that the most he ever raised in a correct one-arm MILITARY PRESS is 126 pounds; but he never specialized on the MILITARY PRESS, and several of the big Frenchmen, and some of the gigantic Viennese lifters, have beaten 126 pounds.

Sandow never claimed a record in the MILITARY PRESS. It evidently was not a favorite of his. Nearly twenty-five years ago, after his first big success in London, he went to Paris and there visited the gymnasium of a famous French lifter who called himself “Paris”. Paris’ specialty was back-lifting, but unlike most other back-lifters, he was a wonderful dumbbell lifter. It is reported that Sandow was unable to MILITARY PRESS a dumbbell of 126,5 pounds, which Paris managed easily.

I also note that in a history of Victorius (another French Hercules) his record in the one-arm MILITARY PRESS is quoted as 123¾ pounds, and his biographer tauntingly exclaims: “How about that, Mr. Sandow?”

But let me tell you of another athlete, a colossus named Michael Maier, who was undoubtedly the champion of his time at the MILITARY LIFT. Maier was a big man, with a 5” chest and 18” upper arm. He traveled as “Strong Man” with a circus, and his stunt was as follows:

Backing up against one of the big tent poles, Maier would stand erect with right arm outstretched. The circus hands would then pass a long rope around him, binding his left arm to his side, and his body and legs to the pole. When they got trough, Maier could move only his head and his right arm. He would raise his right hand shoulder high, two assistants would lift a 154-pound dumbbell and place it in his hand, and then, with a smile, Maier would slowly push it aloft. Hundreds of lifters tried it. There was no trickery, the weight was genuine, but no other lifter had a shoulder equal to Maier’s. It would be a nice question to decide how much the support of the enfolding ropes helped Maier – probably very little.

In 1903 I was chatting with Pierre Gasnier, the little French “Strong Man” who traveled for years with Barnum and Bailey, and he told me that Maier was the strongest man he had ever seen. In fact, he ranked him above Louis Cyr and Apollon; and for a Frenchman to concede that much to an Austrian place Maier pretty high in the first class.

Saxon credits the MILITARY PRESS record to Maier with 143 pounds. This record was evidently made when Maier was NOT bound to a post.

The one-arm MILITARY PRESS should be especially interesting to ordinary physical culturists, because it is a lift that requires no skill whatever. You are probably aware that athletes who do not handle heavy dumbbells invariably contend that there is a “knack” in lifting. I am fully prepared to admit that in a complicated lift like the one-arm “Snatch” there is a lot of skill necessary – just the same as there is a lot of skill needed to put the 16-pound shot correctly. But in this one-arm MILITARY PRESS there is no more knack than in pushing a wheelbarrow. Once you get the bell to the shoulder and stand upright, nothing in the world is going to send that bell up except pure strength.

Reader, the next time you hear someone say that there is a “knack” in all lifting, just explain to him the simplicity of the MILITARY PRESS, hand him a 50-pound dumbbell, and let him test his strength for himself. Just watch how he instinctively tries to use his legs to help him send the bell upwards; also how he tries to rock his body from side to side to help start the bell on its upward journey. Restrain him if you have to; point out to him that he is trying to use a “knack”, and if he wants to demonstrate his strength all he has to do is to stand perfectly straight and push the bell quietly aloft without moving the body or legs.

If you yourself are going to specialize on this MILITARY PRESS, be careful that you get it correctly, and above all, be honest with yourself. I have seen many lifters perform what they call a “Military Press”, and bend at least two inches sideways, and then be furious when a onlooker told them that they had bent the body. It is easy to satisfy yourself, when training, as to whether you are bending or not. After you get the bell to the right shoulder, stand with the left shoulder one inch from a wall, then make the press. If your left shoulder touches the wall you know that you have bent an inch, I frequently have applied this test to convince lifters that they were bending. 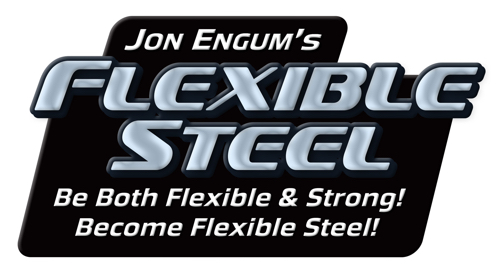