The Ancient Art of Club Swinging 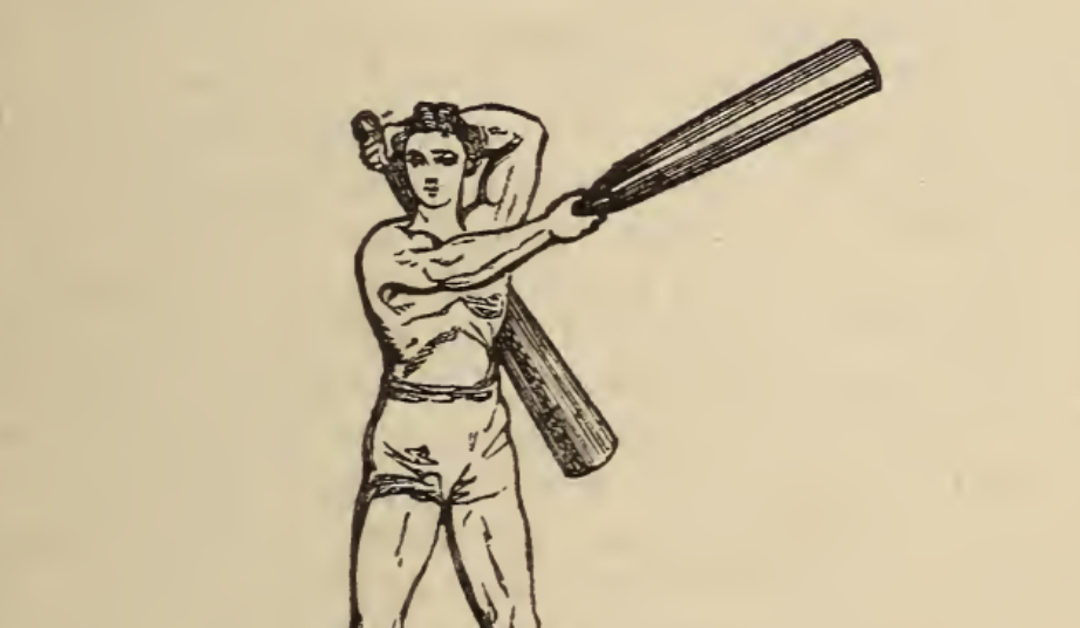 Say Indian clubs and most people will think of small bottled shaped wooden clubs. But there is more to it than that, including a rich and ancient tradition of strength and skills by strongmen of the East. Club swinging is as old school as it gets!

The original Indian clubs were big and heavy, with the goal of building strength for war, wrestling and status.

Russian bogatyrs prefered the Palitsa or Bulava, a long wooden club, as their weapon of choice, above the spear and sword. Club swinging is still used in some Russian martial arts systems.

Indian clubs were brought back to Europe in the early 1800s via the Brits who had been trading in India.
The military were looking for a way to easily train the troops in large numbers and in ways that were relevant and effective, promoting health at the same time.

To achieve this, they changed the design of the clubs the Indian wrestlers used. They ended up with a smaller club, of a regulation Army weight of 2kg, which was easier to mass produce and transport.

With lighter and shorter clubs, it became possible to perform routines that placed a great emphasis on discipline using complex and graceful movements.

While military club swinging became the more popular style in th West, people like  Professor Harison, were proponents of heavy clubs. He was a well-known strongman and physical culture teacher who was honored by Queen Victoria for his physical prowess.

I’ll explain the difference between light and heavy clubs further down, as both styles complement each other.

Indian clubs were quickly adopted by other nations, especially by the Czech Sokol movement, and the Germans, who integrated them in their current physical training systems. The Germans went on to take the clubs to America, and created the Turners movement.

Those social movements are very interesting as they defined ideals of physical and mental fitness, and civic responsability.

Not so long ago, physical culture was associated with the education of young people. Today’s fitness industry is mostly about how good we can look, so could take some inspiration from history.

”Of the diverse physical education equipment developed in that era, one of the most ubiquitous elements of German American gymnastic work was the Indian club, an exercise tool first brought to European attention by British soldiers who adapted it from a war club used on the Asian subcontinent. As part of calisthenics and gymnastic exercises, the Indian club also had a long life in America from the Civil War era to the 1930s, and was an equipment mainstay not only in a standard physical education regimen, but also as a part of aesthetic demonstrations during ”turnfeste” and in the nation’s school gymnasia.”

What are Light Indian Clubs Good For?

The Victorian era books mention many attributes that can be improved by swinging Indian clubs. Indian clubs were used both for fitness and leisure, but also as a form of early physiotherapy.

Through the work we have done, we have had people report increased strength endurance, better mobility of the spine, hips and shoulders, better coordination and timing, and improved balance. People also notice better grip and core activation.

The traction effect of the swings also helps lubrificate and keep the joints healthy, and have helped many people recover full range of motion in their shoulders.

The rhythmic repetitive circular patterns help switch our nervous system from ”Fight or Flight” to ”Rest and Digest”. It’s like meditation in motion.

Overall, you could say that Indian clubs are especially geared towards health and longevity.

As such, they are the best all round type of club, suitable for everyone. They provide exercise for the sedentary populations, and hep athletes recover faster from training and stay pain free.

Basically we hear ”I am stronger, I feel and move better” a lot, even though when people swing clubs weighing only 1kg.

As the art is being rediscovered, especially in the kettlebell community, you can learn and buy Indian clubs from many sources.

What we do differently comes down to our Pahlavandle™, our teaching, and the fact we have so much training material anyone can easily follow and apply.

We decided to break free from dogma that says you must do things in a certain way because that’s how it’s always been done.

The Pahlavandle™ is our invention, and we make it in Denmark, where we are based.

Back in 2013 I met my partner Ron Bader while I was looking for someone to turn wooden clubs to my specifications.

The ones I had were not well designed and really expensive. Anyway, long story short, Ron fell off a scaffold in 2009, broke his skull and spine in several places, and 4 years later had fully given up on getting his old life back.

When I explained to him what Indian cubs were, he told me his story and we decided to train exclusively with the clubs.

6 months down the road, he had regained mobility and muscle mass, and could sleep a whole night through. He became such a strong believer. that his mind started to think of a way of making Indian clubs available to the general public.

We did not make it up, trainers have called our Pahlavandle™ a game changer.

A blue handle you could screw onto a plastic bottle was the result. The really cool thing is that the Perrier bottle was inspired by the design of Indian clubs, so we just used the idea.

The advantages of the Pahlavandle™ over a wooden club are that you can switch bottle shape and volume, and increase the weight up to 3k per club if you fill the bottles with sand. Not only that, you can even screw the handles together to create more torque.

We did not stop here, we also created a large club with similar thoughts.

The Pahlavandle™ XL weighs 2 kg when empty. You can fill it with wood pellets, gravel or metal scrap and get a 20kg club with a wooden handle, and a tube that you can cut down to length.

Money is often a barrier when it comes to trying something new. While wooden clubs are beautiful, they are expensive.

Not until now was it possible to find affordable Indian clubs, which is one of the reasons they nearly disappeared from the public eye.

When we created our adjustable Pahlavandle™ original and the Pahlavandle™ XL in 2017, we opened up new possibilities, and attracted a lot of interest form trainers and physiotherapists.

OK, having a product is great, but education is just as important, if not more. So we created video downloads to help spread knowledge of indian clubs, and now we have customers in over 50 countries.

Here’s an example of some of our teaching material

Our focus is new beginners, getting them started on this journey, but even experienced club swingers have thanked us for the tutorials we made, and how we organized them.

We do not have to be limited by what books written in the Victorian era say or passed from generation to generation. We all know how a story changes the more it is told again and again…

All the current ressources on Indian clubs teach the exercises, but you’re basically on your own as to how you can implement a training program.

We looked at the different traditional styles and fusioned many things into our unique blend.
One of the things was to simplify club swinging into ”open style” and ”closed style”. Non essentail details were left out.

Swinging Indian clubs is actually intuitive. As long as you follow the key concepts and do not over reach your abilities, if it feels good, you’re probably going to be OK.

At the end of the day, circles are circles. Once you know the alphabet (the circles in the different planes of motion) you’re free to compose what you want.

At Heroic Sport, by keeping things simple, we empower people. From kids, to Parkinson’s patients to elite athlete and office people, we have seen the results of our approach to club swinging.

Light clubs are generally swung in a open style, or basically using the full length of the lever arm, and minimal body movement.
Being small in size and lightweight, you can perform a wide variety of exercises with complex patterns requiring fine motor skills. Like a kettlebell swing, you can also increase forces by swinging faster.

The end of the light clubs spectrum would be rhythmic gymnastics, where athletes swing tear drop clubs weighing about 200-300g, making shapes you’d be hard pressed to replicate with a 1kg club.

Heavy and long clubs are generally swung in a closed style, putting the whole body into each swing. Here you must swing the clubs tightly against the body to minimize the injury risk. Heavy clubs are also swung at a slower tempo, and overall, you can perform less exercises.

It’s really impossible to say what is a light or heavy club, as what feels heavy might feel light to someone else. If you understand both swinging styles, it won’t matter anyway. We encourage everybody to start with the open style, but also practice the closed style!

With single club swinging you can better work the horizontal and diagonal lines.

And when swinging single club, do both single and double handed exercises. Same same but different.

Double club swinging is a fantastic way to introduce cross crawl patterns in your training, and experience meditation in motion.

The old Hindu texts recommend training until you work up a sweat on the forehead and call it a day.
If you’re new at this, treat club swinging as an extended warm up and skill practice. Stop before you get frustrated when learning new moves!

Remember that frequent, short, focused practice sessions is the way to learn and refine new skills, from playing the piano to speaking new languages.

Basically ”As often as possible, as fresh as possible”. Sounds familiar?

If you’re already doing strength training in any form, maybe start by using club swinging in your warm ups or cool down.

Here are 5 swings that are perfect for a new beginner.

For the open style club swinging, start with a club around 1kg or just under.

For close style club swinging, a 3kg club is a good start.

Always swing in a slow and controlled manner at first.

If the moves are choppy, try a lighter weight.

We recommend keeping the balance between light and heavy clubs to about 70%-30%. And heavy club swinging does not mean the heaviest you can get your hands on!

Use your common sense and feedback from your technique and sensations in your body. 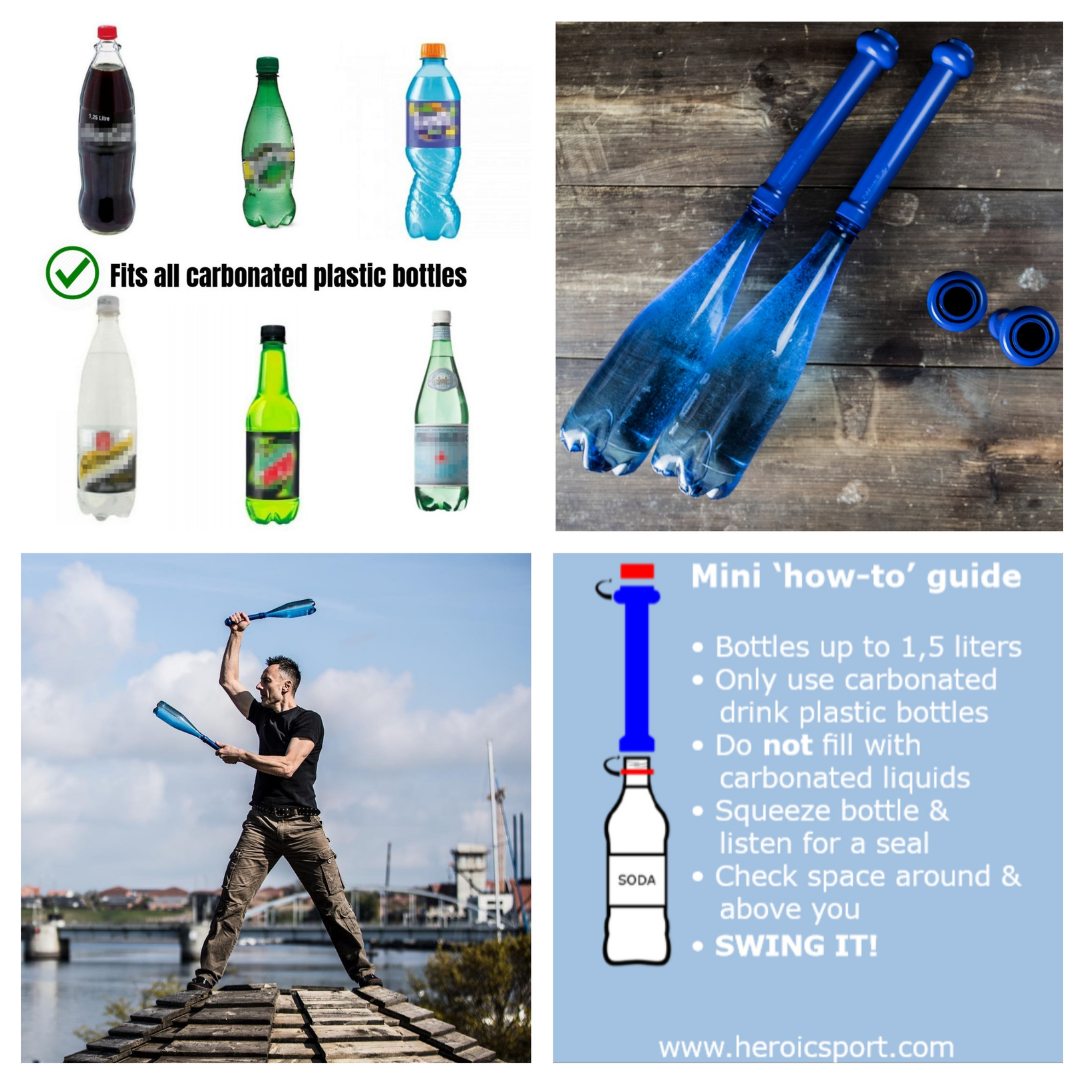 Where do I Go to Learn More or Buy a Set?

Enter the promo code: Simplex2019 to get 10% off your purchase on our website for the rest of 2019. (The only product not eligible for this offer is our Pahlavandle™ 10 pack)

About the Author: Thierry Sanchez is a physical trainer from Denmark, and graduated in 2009 with the Danish Sport Confederation. He has practiced, researched, and taught workshops and Indian club classes for over 10 years. He also took a gold medal at the IGSF Kettlebell Sport World Championship in 2010.